The New House: After! (Finally!)


Months and months (and months) ago, I shared the before pictures of our house, if you haven't seen that post check it out first. Many people told us that this renovation would take so much longer and cost so much more than we expected but luckily neither of those predictions were true. From start to finish the work took 3 months, which was just about what they predicted. The house was actually ready before we were, but by March we were moving in! My momma always taught me that it was rude to talk to about your finances, but for those planning a project like this of their own, I would be happy to give the details.

My absolute favorite feature of the house is the heating system! If you knew our old house, you know we were roughing it. Besides having our bathroom outside, we just had a couple of stand-alone wood stoves as well as terrible insulation so in the winter we could never keep the place warm enough to not have a sweater or sometimes several on when in the house. The night I gave birth to Manuel my mom had the sole job of loading wood into the stoves. I definitely invited her to the birth for moral support but mostly she ran back and forth between the stoves loading wood while the midwives looked after me- and even like that we were all wearing jackets, hats and wool socks! Manny was born in February and the poor kid was never naked more than a few minutes until well into spring- even diaper changes were like taking the polar plunge- but it built his character... Here, we have radiators in every room (including the bathroom- I even strategically placed the towel rack above it so you have a warm towel after a winter shower- serious luxury!) The wood stove in the kitchen heats the water for the radiators as well as heating the water for the shower, sinks, etc. In the summer, the water for the sinks and showers is heated by a solar panel on the roof. We were not convinced that the smallish panel on the roof would work well enough but so far we have gotten consistently very hot water- it will surely be less so in the winter but then we will have the stove going!

One day when the work was nearing an end we came by for a visit to see how things were going. When I came in the painters were hard at work and I was floored by how beautiful the place looked! Mostly I just gushed over the grey/blue trim color. I didn't remember choosing that color but whoever did had great taste! They shyly informed me that that was actually just the primer and that they were getting ready to paint it dark brown. Trying not to look horrified, but also trying to be very clear, I told them to just leave it with the primer- it was perfect!
When we spent time in the house before the renovation, I was convinced the hallway would always feel dark and small. I opted for a glass door on the living room/guest room and no door to the kitchen but I think the light-colored wood on the floor and ceilings (and the gray trim!) made the biggest difference in making it feel more open.
All of the new doors were made by a local carpenter and they are simple but I love that were made locally by someone I know! The rooms with two doors, like Manuel's pictured below, and the bathroom are original. Pretty much the only things we left were the double doors on two of the rooms and the marble sink in the kitchen, I LOVE the marble sink!
We went back and forth about what to do in the bathroom. I had really wanted a clawfoot tub but discovered that they were almost impossible to find in half-way decent condition for less than a few thousand Euros, and I just couldn't justify it. We decided to go with a shower but we didn't want a prefab box and we wanted it to be fairly large so we had a base cut for the exact width of the bathroom and then just tiled in the walls around. Filipe wanted a glass door. I absolutely did not want a glass door. You will notice there is no glass door and we are still married- win! 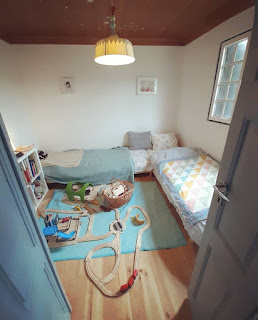 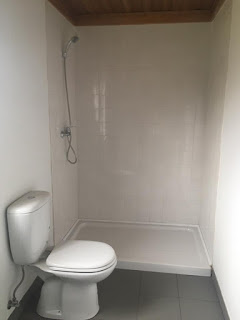 Manuel's room is probably my favorite room in the house- mostly because it's the only one that I took any care in decorating! The rest of the house is a hodge-podge of things we collected over the last 10 years together but for Manny we tried to go for something consistent :-)
Okay, the kitchen might actually be my favorite room! We got a quote from a local carpenter for the cabinets and I really wanted to go local for this project, as we had for everything else in the house, but when we looked at what he could offer versus what we could get from IKEA we ended up choosing IKEA. Filipe assembled all of it and we are actually really really pleased with the result. The only thing missing is the knobs for the cabinets. They came with some but I just didn't love them so for the past six months I have been struggling to open the cabinets every day because I just know one of these days I'm going to be at an artisan fair or small shop and find just the right hand-made pulls for cabinets! If you come across any- let me know! 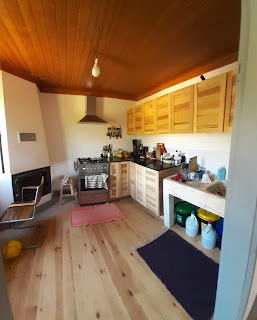 Alice Piontek
I came to Portugal in January of 2010, planning to stay only a few weeks. After falling in love with farming, a guy and a country I decided to stay. These days I am working to form a sustainable life and small organic farm.